As we remember those, just like James Nankivel, who died in to battle to protect, preserve and defend our freedom from those who (set) hatred and make war, where millions of innocent people die, we need to stand still by the fact that we need to be careful with the freedom that they gave us. Living in harmony and respect for each and every individual. Those who gave their lives will never grow old, but they live forever in our hearts. Even a 100 years after the end of the most bloody conflict in human history, we still suffer today from the endless pain that war and terror brings us. Our very own small and peaceful community was last year shocked by the death of Ann-Laure Decadt, 31 years young, married to Alexander and loving mother of 2 beautiful children. She was brutally murdered, just like that, in New York, in a terrorist attack, innocent and having fun with her sisters and mother she was turned away from those who love her and knew her well. It was hard for our community to understand that terror, and the pain that it causes, could come so near. We thought about how lucky we are not to deal with such a pain directly like Ann-Laure’s family and came together in harmony. Only a few of us know what war means, the rest can only imagine. With the attack we came closer than ever by the feeling of what war means. It was horrifying! For me personally it was the most saddest moment as a mayor, but at the same time it was the warmest moment I have ever known in my life. A moment where people embraced each-other, cared for one another. And because of the fact that Ann-Laure also never will grow old, we must cherish that warm moment to keep her warm and loving memory alive. Just like all victims of war and terror we must never forget that they will not grow old, we need to keep them alive in our hearts and honour them by living peacefully next to each other and live together with the most deepest respect for each and every individual.
I want to end with a quote of former US president Ronald Regan on Freedom; “Freedom is never more than one generation away from extinction. We didn’t pass it to our children in the bloodstream. It must be fought for, protected, and handed on for them to do the same”. 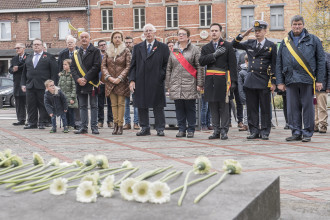